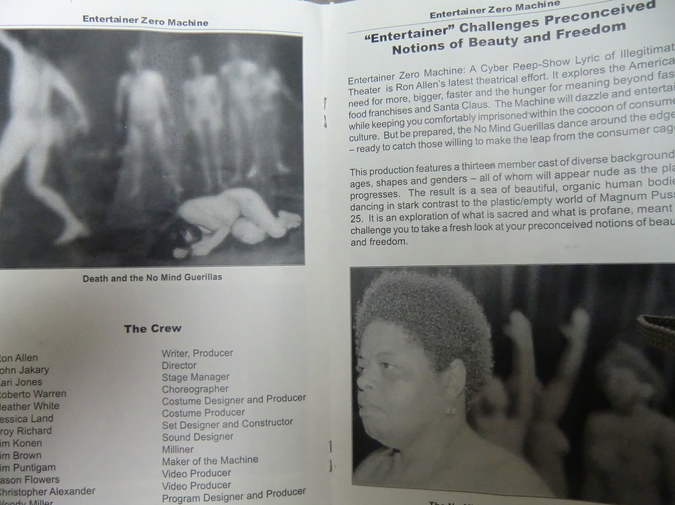 Where the fuck are the collected plays of Ron Allen? The police have won, that’s where. We’re in year four after Ron. Who’s goddamn assembling the works? I knew the man by his lovely swollen foot. I got to attend Entertainer Zero Machine. Here it is: Little cages up on stilts with naked actors bent into them, screaming immaculate language like “I cough stigmata into my palms!” I’m paraphrasing from a decade ago because where are his fucking collected plays? Is his intense biography not enough for some socially conscious, award-friendly journalist to forgive the art of the language and write Ron into the worldwide canon? Has his street cred not flung the academic distance with its song? Are we too busy calling out other writers about their civil sensitivities, as if us unnoticed arty puds or even some acknowledged comedian is invoked by anyone’s boring-as-birth plight in the fucking world? Meanwhile, Ron Allen’s plays are where? Please expose for me the communal bullshit (if you’re a journalist and only then) so I can opinionate myself about it and, perhaps, join a group of the likeminded to discuss. Yeah. If you want to poke your hope on art – where the fuck are the collected Ron Allen plays? I’m spinning this with my flimsy European “albino doo doo in a dark auditorium” – Baraka. I’m way alone here, but that’s the job I fanaticize. Just because you’re alone does not mean you prefer your own fucking company. That’s why someone who believes anything’s worth conquering must, again, get these plays published caviar high. I yell because I love or used to be able. Writers should be such a pretend infantry against the way shit is that mass shooters resemble a fucking McDonald's parking lot to us. If thou wouldst, for those aiming to hold land instead of being under it, now or never. I know this: Ron Allen was a black writer and activist drafted to Vietnam who spent time afterwards homeless and addicted to drugs. He survived all that shit and took himself established by his writing talent, leading addiction workshops for the homeless in Detroit. He put on several plays and released (self-published or maybe through grants or communal funding?) books of poetry which can be found at the main branch of the Detroit Public Library. One’s called Neon Jawbone Riot, the greatest title titled. He moved to California around 2006 and continued his work with a company called LAPD. Not the pigs. He died in 2010. Where are the hmm of hmm of Ron hmm? Did he do enough to get a word in on our pretentious public stage or is it not even fucking beneficial to try? Sorry the grammar didn’t memoir that hard. Well, look outside anywhere. I assure you his plays will gnat at a dwindling handful of memories.