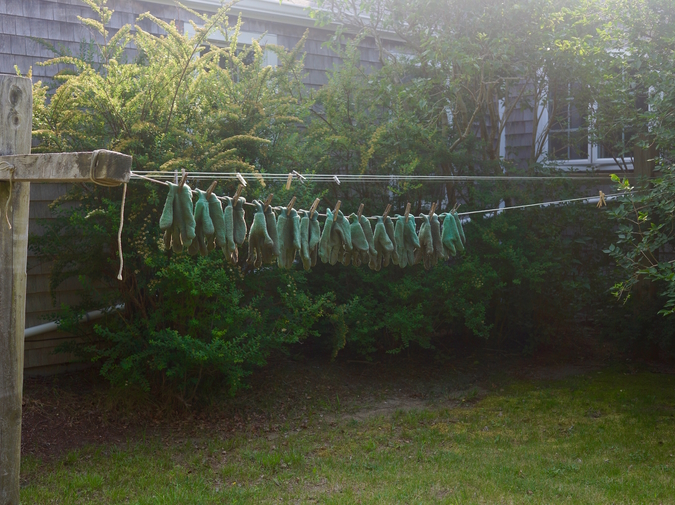 Went home later and Thom was home. Had just gotten back together. Me, Thom, and little Norm watched the news. Thom brought me a beer and him a beer. I brought me a beer and Thom a beer. After news we had little Norm toss all our beers off the balcony into the dumpster. Watch the cactus I said. Plinks like peeing in paint buckets. Little Norm missed half like usual. I had to work at the bar at six so I drove away. Little Norm said bye-bye mommy. We were whiter than depressed smart girl pills but he called me mamí. He liked playing basketball with neighbors who were brown. Never knew were they Mexican or what. Thom always said you know by which pocket they go for and I’d hit him in the arm and say Thom stop. He’d say lighten up big n’ bad. I’d blush when I didn’t want.

Hard to believe about the money. Couple must have been there before. I knew regulars like finger nail grooves. Wondered how much they’d seen me cry and cuss. I cried and cussed a lot at Maria’s. Food was shit but everyone loved it. Never got that. They said they’d prayed and prayed and God said so about it, so the hundred was mine. They said they’d seen me working. And trying—struggling. The hundred was mine. They put their hands on my shoulders. Never got that. What is prayer anyway.

Later at bar. Showed up and had shot of tequila with Carmen. Young writer student from college showed up too. Was in love with me. He said guess what I said what. He said I just won three thousand dollars. I greeted a regular I called Hippie Dippie. Hippie Dippie’s hair was used floss. Same color too. Student was Harv but at bar I called him Dez. Joke. We had inside jokes like fish have water.

Served some regulars. Flirted with cook. He crouched low and touched me behind my knees. Moved arms up. Escalators. I liked it but was afraid he’d find my bills in back pocket. I said that’s mine. He said what, this. I said oh you. We joked like that and I always liked him. Was a good guy. Made things fun when they weren’t. Had many girlfriends.

Couple days before this Thom showed up at my place while little Norm watched TV. I set up the VCR wrong all the time. Little Norm got half his programs and half of stuff he didn’t want. Poor kid. Never saw the beginnings. Never saw the ends. Saw the wrong beginnings and ends. All wrong. Never complained. Maybe he should’ve complained. Got to complain sometimes. Thom said how much flowers cost in this town. I said what. He said it’s the thought that counts and kissed me. Blushed when I didn’t want.

Back at the wood. Getting tired only forty-five minutes in where are you God I thought. Dez said won three thousand dollars let’s get the fuck out of here. I laughed. Dez was also funny. Made me laugh. Made things fun when they weren’t. But Dez loved me. Only because he wanted to. He called me nicknames like Pardner and Killer. I laughed. That’s what he wanted. Maybe once I kissed him, later.

Where would we go Dez I said.

The couple was ugly. Both of them ugly. Ugly people believe in God. People with unorganized filing cabinet teeth. I don’t know how old earth is. I don’t think women fucked it up. Ugly people believe in God because they believe in people. They hate people because they believe in God. The hundred was mine. They prayed to God and God said so about it. The couple looked sick. Like they both had cancer. Mom died from cancer with baseball history book in her hand. Said she wanted something to hold and Dad grabbed the book he loved most. All but killed himself years later saying why didn’t I grab one of hers. That one always makes my heart look over the edge. That one always makes my heart wanna throw up. I love you Dad. I love you Mom.

Dez said we could go anywhere. Thom said please just come on and let me in, and little Norm said Daddy, and I cussed the first time in a while at home. No blood between Thom and little Norm. I said Dez what about your classes. I said Thom Jesus Christ. I got Dez another drink. I loved Thom because of little Norm. His eyes were polite. Only polite thing. Never got shiny when drunk. Never thought he knew what I wanted.

What had God told the couple. I will always wonder. The couple was so ugly. Looked like never fucked or kissed or anything fun. Man, balding like old blanket. Woman, filmy and pale but nice clothes. How often had they seen me. Maybe I never had their table. Maybe angels. Little Norm would think, Angels, mamí.

First two drinks for Dez, on the house. Dez liked to talk. Every time near him across the wood, he said something. Big mouth. I did like him so much. Dez six drinks in. I made them weak and he knew. Carmen and I, tequila. Carmen and I and Cheyenne, clocking in, tequila. I said Dez don’t you leave yet. Dez looking in drink like there was sex in there. Mouth curled. Some kind of smile young men do. Eyes slick like water in dreams. Dez was dreams. Stood up to leave and said three thousand and hated him. I said Dez come on. I’m pouring the drinks come on Dez. Wanted to show me he wasn’t a child. Wrong. Showed me he was. Even he was like them and he knew me best. Made me blush and liked it. I did. Three thousand. Next time around when God lets us go again. Say you have nothing. Say you have nothing.

We’ll get better Thom said not just later that day but all the time. Men want to fix. I wanted to live. Not young or free. Dez wanted no worries. Dez wanted me. Thom left again. And again. Not how you think. Didn’t need him. Allowed him. It was me. I gave chances. Couple touched my shoulders. We have seen you working so hard and prayed about it. God told us you need this. I cried they cried God said you’re welcome. I cried by the dying cactus. Round of shots for the girls. I liked crying. Rivers on my cheeks, warm. Little Norm said Angels, mamí. You don’t even know kid. Angels. Watch it kid I’ll knock you out. Angels, mamí.

Shane Page is a youngster writer who lives in Springfield, Missouri. He likes to bum around and spend all of his money at the Thai restaurant across the street. His work has appeared in The Molotov Cocktail, Bottlecap Press, and Occulum.