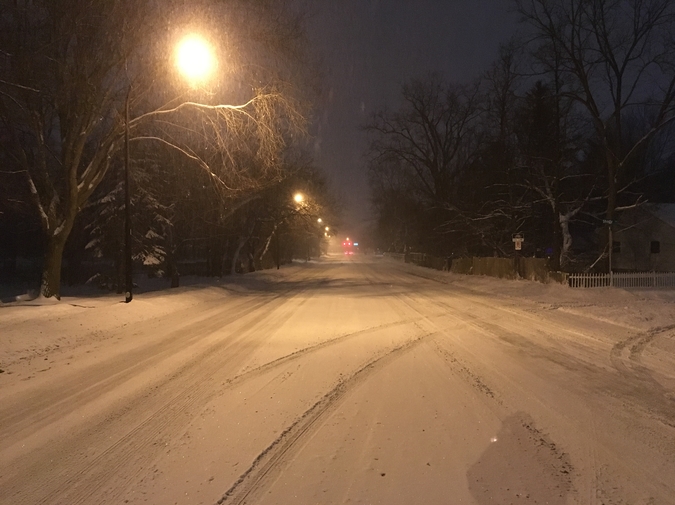 Like a bean, you too, have never seen snow,

so of course let it greet you fully in the face of your body
and tackle that which sent it into the dust
and rejoice that a body can chill and still chill back.

When Neil saw falling snow for the first time I forgot
about how that can be a scarring thing, or how
the stasis of weather can static our weather;
thoughts drift down in dissociated snow pattern

and beg to be embraced for seconds longer.
This is me begging you to come back to reality
the only way I know how, which is with pelt and shock,
with the crust of frozen thoughts careening into your face.

and I am cold and in the east coast still,
living the same minutes ahead of you, but sooner
and with more bite and chill. Watching you watch snow
for the first time is a memory I don’t want to melt out of me,

even if it must freeze itself present.

In the poem in which I try to write about dogs,
I still get ID’d wrong, which is fair – I guess.
It costs money to get the government to stop
mis-identifying you, so I guess it’s fair
that poems also need work on mis-identifying you.

Greyhound finally accepts tickets from your phone,
but I still have to show identification
still have to unfurl myself and be like
okay I know this is weird, but this plastic calls me *******
but to me, call me Alain.
To everyone else though? Whatever.

There’s only two genders, depressed and correct,
so in the poem where I’m dogs,
I say I’m a Chesapeake bay retriever,
and everyone says it’s sad because my grandma’s died
and you want to die too.

In the poem where I leave no one thinks it’s to somewhere,
it’s like leaving life right? like goodbye, time to die now, right?

The joke of all of this is the gays can’t drive
so we gotta take the bus
anyways right?

Right.
I’m just getting on a bus to modify this body
into something I can live in
since I can’t drive to move this body somewhere
I can Live in,

so like, yes, I am leaving,
and a different me will return,
maybe a me that wants
to die a little less than all the time.

Even my prescriptions
have my name in parenthesis,
so I guess that makes sense too, that my identity
is on the peripheral to the perception of it.

be five-foot-two dog with a pixie cut
and a smaller, rounder face.

Be a dog that is happy, and has a home
that they want to stay in.

Alain Ginsberg (they/them) is a trans poet and performer from Baltimore City, MD. They are author of the chapbooks "Until The Cows Come Home" (Elation Press, 2016) and "Loathe/Love/Lathe" (Nostrovia! Press, 2017). Outside of writing, Alain is a barista, a bartender, a Taurus, and a bitch.