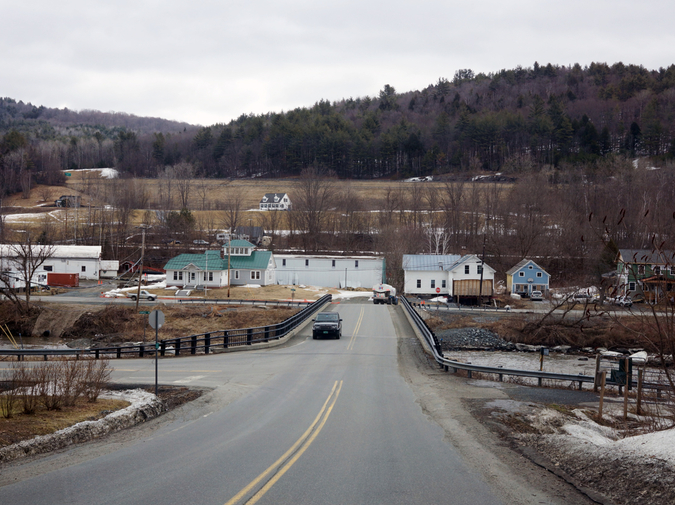 Before I was fired from Pinnacle Heating & Air, my boss had me drive to Limon to pick up the most expensive heat pump on the market at his other store.  I almost felt bad for the guy he was swindling, but I got over it.  If the guy can’t swap out his own heat pump, what kind of man is he?  He probably can’t drive a manual transmission either, and I have no respect for him.

I was returning from Limon to Colorado Springs on US-24 when I thought about how much I missed West Virginia.  I thought about Spruce Knob, the highest point in the state, standing at 4,863 feet above sea level.  To reach that elevation in Colorado, you would have to drill 1500 feet.  The point would be somewhere between the fish and the dinosaur bones.

When my wife wanted to move to Colorado to be near her folks, I insisted on living in the suburbs.  I hated the idea of living that close to my neighbor, but I would rather be able to watch his television from across the street than be exposed to the high desert or the bare-ass mountains.  The only trees below the timberline are bristlecone and ponderosa pines, with some aspens.  Not a hawthorn or a sweetgum in the whole damned bunch. I like trees that shield me from the sun.

I was twenty minutes outside the Springs when I noticed a willow in the middle of nowhere.  The leaves were as thin and yellowed as the pages in my grandma’s Bible.  Finally, a sign of autumn in the desert.  It’s hard to tell the seasons here except for when the snow blankets the brown stalks of grazing land.  The tree was next to the road, so I was able to admire the leaves for a mile as I approached.  I slowed the van to get a better look when I saw the dead horse in the shade.  The paunch was bloated and the legs straight as arrows.  The fallen willow leaves made weak attempts to cover the carcass that looked like an upended pot-bellied stove.  A barbed wire fence enclosed the horse on a half-acre of dry dirt and horseshit.  The plot adjoined a small rancher with a redwood deck running the length of the house.

I pulled into the driveway and on up to the house and killed the engine.  There were no cars in the driveway, but I could hear shouting from inside.  I climbed the steps to the deck and nearly tripped over two plastic folding chairs.  When I knocked on the screen door, its glass rattled.  I looked around the deck while I waited.  Butt and ash-filled beer bottles littered a tree stump table.

The door opened and I saw starched blue jeans with a crease down the middle of each leg.  The cowboy wore a V-neck undershirt and a white pair of socks with grey toes.  He leaned against the door frame.

“I think your pet horse is dead.”

“I can see that.”  He measured me with his eyes from my work cap to my boots.

“But aren’t you going to do anything about it?”

A woman screeched something in the background.  I couldn’t tell if she was real or on television.  Either way, the cowboy was visibly pissed that I was keeping him from her.

“What the fuck you want me to do?”

When I didn’t respond, he stepped back and swung the door closed.  I said, “Well, fuck you too” and started down the gravel driveway.  I was almost at the van when I heard the dude bump the door open.

He had slipped on a pair of boots and a freshly-brushed white cowboy hat.  He cradled two bottles of Miller Lite between his thumb, pointer, and index fingers.  In the other hand he gripped a three-foot machete.

He handed me one of the beers and swung open the spring-loaded gate.  The bottle was warm.  He held the gate for me and twisted open the bottle top with his wrist.  I tried the same trick when he turned his back, but the serrated edges scratched my skin and I opened the beer with my shirt tail.

We looked down on the horse and I almost puked.  The teeth spaces were filled with maggots, and her face was buried in a pile of shit.  The cowboy crouched down and slapped the rear flank, scattering flies and dust.

The first cut rescattered the flies, and by the third hack they figured there was a roadside magpie somewhere to nest on.  About halfway through the job the cowboy elbowed the swollen belly.  With a samurai-chop he sliced open the side to relieve the gasses.  It recalled to me the time I knifed my brother’s football for spite.  I did not have time to open my mouth before the warm pilsner flooded through my nose.  I gagged out an “I’m sorry.”

The cowboy took in my heaving face and then the puddle on the ground.  “What the hell for?” was all he said before he turned to work through the thigh bone.

He finished the last cuts when I noticed the base of his ring finger was a lighter shade of bronze.  I thought of my wife, and how she made me move out to this god-forsaken country where you can get a sunburn on your left arm just by driving north in the afternoon.  I said, “Sometimes I wish my wife would leave me too.  Or shoot me and put me out of misery.”

He eased a canvas sack over the severed leg without responding.  His hands slipped under the meaty portion of the thigh and he groaned lifting the weight, blood and sweat soaking through the V-neck.  “You gonna help me?”

We crab-walked the hindquarter through the dust and stopped at the rear of the van.  I straightened my back and was about to open the rear door when I realized I could get fired for this.  I think the cowboy saw the doubt in my face.

He rested palms against knees and looked at me below the brim of his hat.  “You know, I like you, but you like to talk about things that are none of your goddamned business.”

The weight of the leg nearly blew the gel from my lower disks.

What felt better was driving back to the Springs with the slab of rotting meat reeking up the back of the van.  For a moment I was back in the hills with a freshly-killed deer in the bed of my truck and drinking beer with my old man, a pyramid of cans tottering on the dash.

The wife was not as enthusiastic.  I did not tell her about the leg when I got home, but she smelled the baking flesh in the garage.

“Just what are you planning on doing?”

“I am going to butcher it and throw it in the smoker.  Just like ranging cowboys used to do.”

“What are you, stupid?  Cowboys didn’t eat their horses.  And even if they did, you ain’t no cowboy.”

She expected me to set the leg on the curb with the rest of the garbage, but I knew no garbage man was going to hump that stink sack.  When she left for the mall, I dragged the leg to the backyard.  I pulled a bottle of Fat Tire from the fridge and a shovel from the basement and buried the bone and flesh somewhere between the third and the fourth sprinkler.

Steven W. McCarty lives in Virginia. He is a co-founder and editor of The Noisy Island, an online journal for high-school writers.