Balls and Strikes I: Not about Astronauts 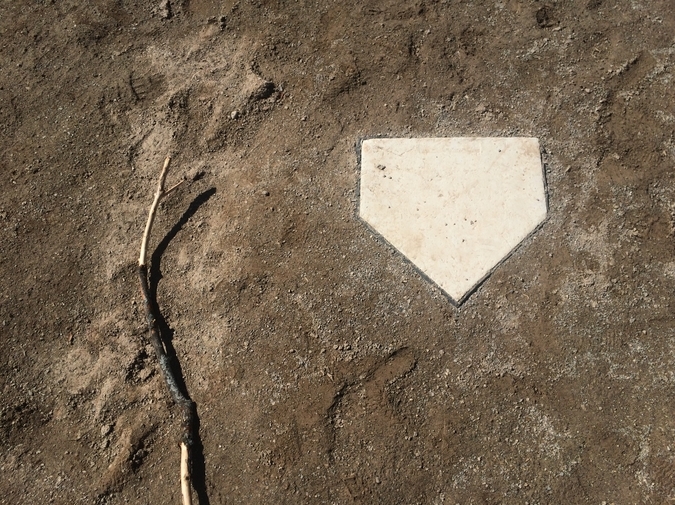 My earliest memory is rubbing neatsfoot oil into the pocket of a baseball glove. When I turned eight, my dad gave me a wax box of Topps cards. I opened all 36 packs at once and nearly choked to death on the gum. And when I shook hands over a chain-link fence with Dale Murphy after an exhibition game between the Atlanta Braves and their minor league affiliate in Macon, GA, my love for the game was complete. I would sneak downstairs at night to watch away games against the Dodgers, the Giants, and those oddly-colored Padres. I’d draw diamonds in the margins of my homework and whole stadiums on the back. I’d design logos and uniforms – both home and away – for places that didn’t have teams, cities like Charleston, Las Vegas, Anchorage. Then I’d group those teams into leagues and divisions, draw up complete, 162-game seasons, and play all the games myself with a pair of twelve-sided dice saved from some board game my parents had confiscated because they’d read somewhere it was connected with devil-worship.

I played real baseball, too, of course, and was pretty good until I got to junior high school. My first year in coaches pitch, I batted a perfect thousand – if you counted, as I did, the errors as hits. In one game, I hit a grand slam that knocked out a right-fielder on the neighboring tee-ball field. To supplement my pitiful allowance of two and a half dollars a week, I drew baseball cards of myself and sold them to my grandmother and all her nursing home friends.

By the age of ten, however, my dreams of becoming a professional baseball player were beginning to fade. My first year in fast pitch, I struck out five times in one game against my best friend Bart, who played for the Dr. Robin Ivey Chiropractic Yankees. The fifth time, I slammed my bat into the dirt and said something awful, and the umpire, who couldn’t have been more than 16 and sported a giant mullet, ejected me from the game. That was far worse than the spankings both my parents gave me that night; those only inflicted physical pain. Reflecting in bed, hungry, on what the ump had said and the sign he’d made with his arms, I thought of the picture in my illustrated Bible of God pointing Adam and Eve the way out of Paradise.

My friends lived for bottle rockets and Boy Scout merit badges; I, however, lived for called third strikes. I didn’t even care if the Murph struck out, so long as the opposing pitcher caught him looking. When that would happen, I’d rise to my feet, fill my lungs, and finish him off, because an umpire can have no heroes.

My weapon of choice was the chainsaw. I’ve never held a real one and have no desire to. How absurd that must feel, using a chainsaw on a dead tree branch or something when you spent practically your entire childhood cutting down professional ballplayers stunned by a nasty slider.

There are many different versions. My standard one went like this: I would stand up solemnly, turn my whole body toward whichever dugout the dying batter had come from, and lean slightly toward it with an outstretched fist. Then I’d reach my other arm parallel to the first. Finally I’d glance to the heavens, take a step backwards, and yank my arm violently across my chest as though I were pulling the machine’s tight chain. All this would be accompanied by a guttural howl that sounded vaguely like “strike” and “out.” It was a sound I imagined ancient priests making when ripping the entrails out of sacrificial bulls.

The chainsaw was my favorite weapon, but I didn’t always use it, especially on the easy calls. An ugly curve that nicks the outside corner of the plate is a thing altogether different from a fastball that splits it in half. In the latter case, a touch of mercy was required, so I’d just stand up and, taking a small step backwards with my left foot, punch the air in front of me with my fist.

That’s actually a technique I learned from basketball, my second-favorite sport. I grew up during the golden age of the NBA Slam Dunk Contest, when Michael Jordan, Dominique Wilkins, and Spud Webb were kings. But as much as I liked a good windmill or double-pump and was always practicing them on the six-foot goal on the first-grade playground, what I really loved was when someone – in my mind, it’s always a player for Duke – would get a breakaway on a turnover and kind of sprint-saunter down the court and make as if to dunk but then at the last possible moment just drop the ball into the net like it was no big thing. That’s the image that still comes to mind whenever I hear the word “finesse.”

But I never had an interest in becoming a basketball ref. All that running – all that blowing of whistles at all those fouls in the last two minutes of every remotely interesting game – it’s plain undignified. That and the heads of the refs themselves, which are always bald and unnaturally shiny.

What separates the home plate umpire from all other officials in all other sports is his mask. And this is important because when I was growing up it meant you couldn’t see their faces. This was in the ’80s, when the picture quality on even the latest and most expensive TV sets – like the one Bart’s family had that weighed five hundred pounds and required four men to move – was so poor that a game played on Astroturf and received over the air looked almost exactly like something on the Nintendo. It wasn’t a man behind the plate calling balls and strikes and punching batters out. It was a god – maybe even a goddess. The March 14, 1988 issue of Sports Illustrated featured Pam Postema, the first woman to work an MLB spring training game. That cover had an effect on me more electrifying than all my grandmother’s back issues of Cosmopolitan combined.

There’s a story I remember from Sunday School – maybe it was the mythology unit in eighth-grade English – about a man who wanted to see God’s face. I mean really see it, without any filters or fleshy disguise. God warned the guy, but he didn’t heed His warning, and so God showed him His everlasting face, and the sad son of a bitch was blasted from existence.

When I was a kid, I’d think about that poor guy – for I could get it, you know, wanting to see God’s face – whenever I saw a player or his manager start to argue a call. I’d sit paralyzed in front of the TV. If the ump took his mask off, you knew what was coming. You knew how it was going to end: with a weary toss of the hand toward the abyss of space somewhere out beyond one of the foul poles. Even today, when I read in a book about Jupiter or Zeus gathering a thunderbolt to strike some irritating mortal with, I think of Paul Runge or Jerry Crawford ejecting Chuck Tanner from a game against the Astros at the end of another of the Braves’ hapless, 90-plus loss seasons.

I think that’s how it began, and why an umpire on TV can still put me into a trance. Whenever I would watch a game – and that was often, seeing as how, even without cable, we got both WGN and TBS – I’d drag a rocking chair across the rug and place it right in front of the set so I could squat behind it – just like a real ump does, with one hand resting lightly on the catcher’s back – and call the balls and strikes. The rocking chair’s spindles were the bars of my protective mask.

“To hell with astronauts,” I once told this rich kid whose dad had worked for NASA and had given my fourth-grade class a patriotic speech. When I grew up, I was going to be a Major League baseball umpire…