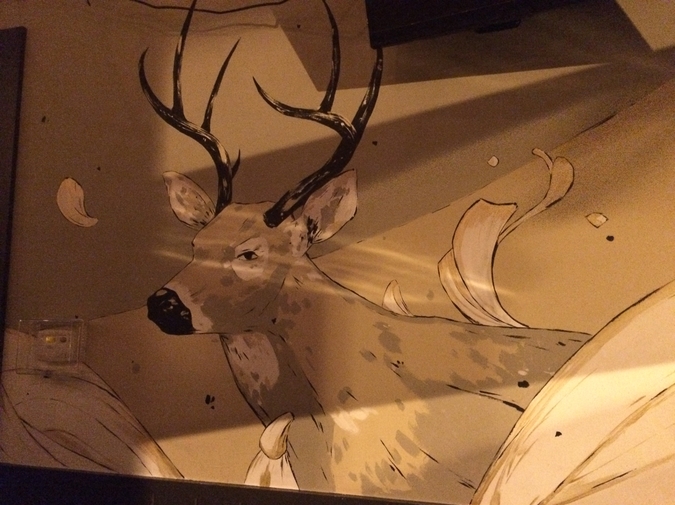 Because the younger was perfecting a painting, the older argued, the parents should delay their announced plans for abandoning the twins in the forest. After all, the older said, you could sell the painting after we are gone, as you have all her previous frames, and afterward be as rich with gold as you are poorer in children.

The parents were not without greed, and so the younger painted, and as she painted the painting changed.

Her new painting—once a pastoral, docile scene of top-hatted hares hosting a tea party, complete with carrot tea, carrot cake—put a smile on the older's face, but now the mother and father began to complain at its changing content: Where was the perfection in this new ugliness, they asked, as at the younger's brush the hares' teeth patinaed with golden rot, as their waistcoats shabbied and tore, as before the canvas the younger shabbied too.

There is cost, the younger said, in making anything, in painting any scene, in telling any true story: You painted a rabbit, girded it with hope, sent it down a rabbit hole you feared, the way character almost contained actor, the one who might be sent to act in your place.

The parents scoffed. You're going away forever, they said, so why not give up this painting, good enough already, and let us take you to the deepest woods, where you can be distant from us in a new way, placed as far away in body as you have been by your weird moods, your lack of faith, your queer ideas?

No, the younger said, not yet—and then as she painted without further comment the very canvas seemed to expand so quickly that the older had to work to hide this fact, draping its edges with drop cloths, inching the objects of the studio into strained new perspectives.

At last the younger—her hair now matted, her clothes ruined, her fingernails torn beneath hardened layers of oils—called the family together, pronounced the painting complete. The parents had never seen anything quite like it, admitted its beauty despite or perhaps even because of its ugliness. The texture of the colors shimmered in a way that drew the parents closer, leaning into their greed. When they were close enough to smell the paint they thought they could hear a buzzing from the canvas, as if the younger's strokes had carried a charge, created a thrum. What nightmares we'll have tonight, they said, smiling with thoughts of gold, as they got so close they thought they could taste the tea party's opiate air, the carrot meat red and steaming upon the cracked wood of the table.

How much bigger it is than we expected, they said, as they tried to measure it with their arms, which were not sufficient to the task.

How much better to keep you forever, the children said, as they pushed and kicked their parents into the painting, where the mother and father now appeared amidst the tea party, tantrumming, much to the anger of the blackfurred, snaggle-toothed hares. The scene began to move, even as the parents tried desperately to face the children—and to see the frame, which if they had caught its edge might still have bore their passage—and there was so little time left for them to escape, just the few seconds before the younger and the older each took a bucket of black paint and with the buckets' contents obscured the painted world.

Behind the black, the older said, she believed that world went on, and it was only this door that was shut forever, so that the only way out of the terribly hungry party was through another rabbit hole, hidden underroot, where if the parent's were quick the parents might get underneath the younger's verdant sprawl of ruin. But probably, the older laughed, the parents would always not be quick enough.

Matt Bell is the author of the novel In the House upon the Dirt between the Lake and the Woods, a finalist for the Young Lions Fiction Award and the winner of the Paula Anderson Book Award. His next novel, Scrapper, will be published in Fall 2015. He teaches creative writing at Arizona State University.