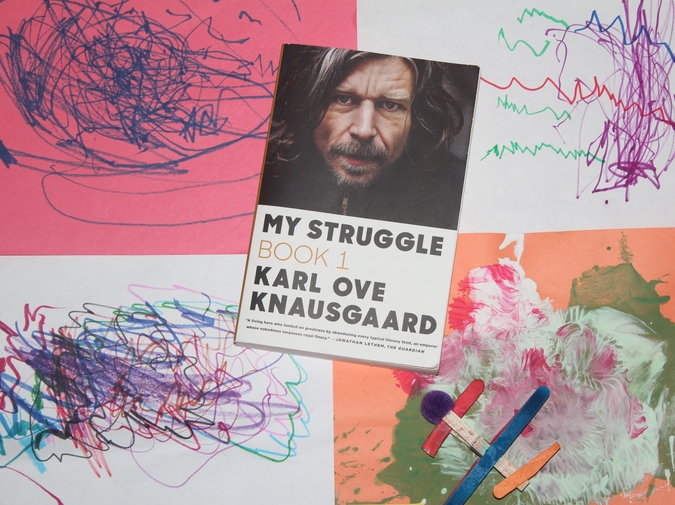 I googled “Karl Ove Knausgaard AND Nicholson Baker” and didn’t find much. A review of My Struggle from The Monthly, an Australian magazine, compared some of Knaugaard’s reflections to “Seinfeld’s have-you-ever-noticed routine, or the micro-observational humour of Nicholson Baker.” A commenter on MetaFilter named raisindebt remarked that Knausgaard’s books gave him the same “sudden rush of memories” that he experienced reading “early” Nicholson Baker. I would describe both Knausgaard and Baker as tangential and intend the most respectful use of that adjective. If I were forced to clean up the house where my father drank himself to death, to throw out shit-stained furniture and urine-soaked clothes, I would let my mind wander away from the task at hand and reflect upon something else, and that reflection in turn would lead to another memory, which would inevitably spur another thought. A how-did-we-get-on-this-subject feeling permeates the second half of My Struggle, Book One as Knausgaard arranges his father’s burial. We seamlessly float from his description of the way he worshipped his older brother’s taste in music to a lovely story about a student interview he and his friends did with the poet, Olav H. Hauge. That successful interview segues into another interview for the same paper, this time with Kjartan Flogstad, his brother’s favorite author. Instead of bringing his university friends, Knausgaard brings his fanboy brother, and the result is a comic disaster.

My father is still alive and the furthest thing from an alcoholic, and I confess to looking up whether Olav H. Hauge and Kjartan Flogstad are actual writers (they are). I have been alone in the house with my daughter, though, and let my mind drift during the 30 or so minutes it takes to warm up a bottle of milk and feed her, as Nicholson Baker’s narrator does in Room Temperature. In those half hours I’ve thought about ex-girlfriends and unfinished work projects and far more trivial matters, like the first five minutes of a stand-up routine I might someday attempt at an open mic night. I know how I started out wondering whether the milk was warm enough and ended with a memory of my brother throwing up after riding the Spider at our local amusement park, but I’m not sure I could write out all the thoughts in between (and even less sure that, if I could, anyone would want to read them). The transitions that both Knausgaard and Baker make, from one memory to another, feel so natural that, as a reader, I can’t imagine these thoughts as anything but real. As a struggling writer, I have to believe and hope that both authors were speaking into a Dictaphone (or some other recording-like device) and later simply transcribed their words, a practice I’ve often planned on doing but never actually carried through. It is too deflating to think about Knausgaard and Baker, years removed from these episodes, effortlessly and eloquently typing out the recesses of their mind.

The MetaFilter commentor, raisindebt, deserves to have his or her entire post on My Struggle quoted here:

I have these tiny epiphanies, sudden rushes of memories I didn't even know I had, over and over again while reading Knaussgard's [sic] books, even though I'm much younger than him and not Norwegian and the rest of the particulars of our lives are pretty different. People say Proust does this (and he's a model for Knaussgaard [sic]) but what I read of In Search of Lost Time [sic] never did it for me like this. I love early Nicholson Baker for a version of the same experience but he's, in a very American way, so self-conscious and eager to make you think he's clever or make you laugh or make you feel something - it rarely feels, on the other hand, like Knausgaard is trying to make something happen - it's just happening. Can't wait for the English version of Vol. 3.

This response is similar to how Joshua Rothman, the archives editor of The New Yorker, described his own response to reading Knausgaard in a recent podcast:

Perhaps reading a foreign memoir is safer than reading an American memoir: the “rushes of memories” that raisindebt, Joshua Rothman, and I experience upon recognizing some aspects of our own lives in Knausgaard’s Norwegian struggle are one or two steps removed from the holy-shit-that’s-exactly-me emotions that American stories (with American details and distinctly American problems) can sometimes elicit. I am thinking of how my sister-in-law used to read one anorexia memoir after another, and how so many of the people I consider mentors quote the 10,000-hours rule that Malcolm Gladwell advanced in Outliers. I am also thinking of how much I enjoyed David Shields’ Dead Languages, an autobiographic novel centered on his battle and sort-of-triumph over stuttering, and how I’d never recommend the book to my father who’s failed decades of speech therapy.

When I was in second grade, I was jealous of my friend, Erik, who was going to Disneyworld over Christmas vacation. I was headed with my family to an entirely different part of Florida to visit my grandparents. I somehow convinced Erik that my Florida destination rivaled his and promised that I would bring him back a souvenir from Boynton Beach if he brought me back something from Disneyworld. I completely forgot about this agreement while idling away for a week at the community pool of Indian Springs, my grandparents’ condominium development. On our first day back at school in January, Erik presented me with a copper, key-shaped Walt Disneyworld paperweight. I told him I’d bring his gift the next day, and that night, I scoured my room for something to bring to school. I almost settled on a porcelain clown bookend but could not find any reasonably Florida-themed explanation for the clown. In a panic, I snuck into my older brother’s room and took the medal he’d won for youth soccer that fall. The next day, I gave Erik the soccer medal and explained that Indian Springs sponsored a youth soccer team, and this medal was their prize for winning the league. My brother never noticed that his medal was missing, and Erik never questioned the veracity of the medal’s birth story.

I thought of this story while reading a section in My Struggle, Book One, in which young Karl Ove makes a pact with his friend in another town to send each other pictures of the cutest girls in their respective classes. Knausgaard tells this story quickly, and it really is just a stepping stone for him to discuss the experience of losing his first girlfriend, who breaks up with him after he asks for a picture of her better-looking cousin. Instead of thinking back onto my own first girlfriend and how I lost that childhood love, the story triggered a memory of the Florida souvenir exchange. The connection is fairly easy – Karl Ove never thinks he’ll have to assemble his collection until his friend sends him a packet of passport photos – and also fairly safe, in that it’s fun to recall the silly hang-ups of my seven year old brain. Perhaps if I knew anything about Tveit, the village where Karl Ove was living at the time of this story, or about Tromoya, his friend’s hometown, I might have been sucked into a more meaningful memory about first crushes and the awkwardness of admitting that there are cuter girls than your own girlfriend (and the frightening possibilities of where that thought might eventually lead).

This inclination towards safe memories may not be universal and may simply reflect the dominant subject matter of Book One. The book is broken up into two large sections, the first an almost Superbad-like series of teenage misadventures (his untalented and under-rehearsed band being booted off the stage at their first gig, his first experience being alone with a girl in her room and the confusion as to whether he’s pissed or cummed himself, and the long and ultimately disappointing saga of trying to be drunk on New Year’s Eve), and the second a painstaking account of how he and his brother dealt with the immediate aftermath of his alcoholic father’s death. We do get glimpses of other periods of his life, such as the beginning section in which he catalogues his morning routine with his children, and his first novel is on the verge of publication when he learns of his father’s death, leading to reflections on how his father’s presence (now, technically, his father’s ghost) hovers over that novel. Reading about the hustle to get the kids to daycare struck a chord with me, as I do this every morning, and reading about the anticipation of a first book’s arrival in stores hit me, too, for a different reason (it’s something I’ve always wanted and fear will never happen). But the glimpses were too brief to overwhelm me with the kind of “sudden rushes of memories,” to again borrow from raisindebt, that I might not relish. The next volume of My Struggle is apparently focused on two major forces in Knausgaard’s adult life, his children and his writing, and so I anticipate (I perversely hope) that my reading experience with Book Two will be bittersweet at times, painful at others, and, as was the case with Book One, gripping from start to finish.

Andrew Bomback is a physician and writer in New York. His work has recently appeared in Essay Daily and the Westchester Review.