AN INTERVIEW WITH ZANE ABOUT THE BAND RUSH 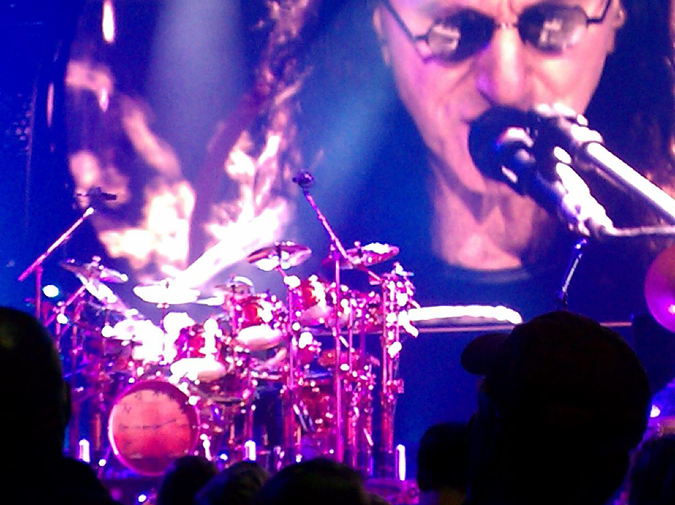 A while back, I wrote a short piece about a song that was really pivotal in helping me get over a bout with depression. Or at least that's what the piece seemed to be about. Because, honestly, it was about my friend Zane, and how patient he can be with me and my depression.

So, Rush just put out a new album, went on a new tour, and were newly nominated for the Rock and Roll Hall of Fame. All three of these things made Zane very happy. And it felt to me like now would be a good time to ask Zane a bunch of questions about Rush and put the answers up here on Hobart so that you, too, can hear Zane talk about Rush in a way that might make you also like Rush.

How did you become a Rush fan?

Essentially, I believe that everything that happens in our lives is more or less coincidental, but I’ll always be grateful that something made me wander into Wal-Mart in Bartow, Florida on that Spring day in 1989 to look for a tape, any tape, to pass the time on the train to Washington, DC. I walked out with A Show of Hands by a band I was only vaguely familiar with. The rest is history.

Why did you choose A Show of Hands?

The only real reasons were that I wanted something new to listen to, and “Hands” had just been released a few months earlier.  At that point, I basically knew two Rush songs: “New World Man”, because it had been on American Top 40 when I was about 10 or 11 years old, and “The Big Money”, because I remembered seeing the MTV world premiere for its music video in 1985.  But that was it.  I picked it at random from among several other newish-looking titles.

I still wonder about that—what if I hadn’t gone shopping?  How much longer would it have taken for me to discover them?  It was just complete, accidental good fortune.

You're going to go see Rush next week. How many times have you seen them live? Do you have any particularly vivid Rush live show memories?

When I see them on Saturday in St. Louis, it will be the sixth time I will have seen Rush live, and I will have seen them in three different decades of my life – my 20s, 30s and 40s.  Every show has been memorable in its own way, but one that really stands out for me is their show in Milwaukee, in 2002.  Many fans, myself included, had by then more or less given up on Rush ever recording or touring again, owing to the tragedies Neil Peart had endured.  Personally, I had resigned myself to the fact that Geddy Lee’s solo album in 2000 was the closest thing to a new Rush album anyone would ever hear.  So when they re-united, recorded “Vapor Trails” and hit the road again, I was euphoric.  That concert was incredibly emotional, because the album was so intensely personal, and we all knew how lucky we were to have them back onstage again.  I probably was in tears more than once at that show, especially during “Secret Touch” (“you can never break the chain / there is never love without pain”) and “One Little Victory” (“celebrate the moment / as it turns into one more”).  That whole cycle of loss and renewal gave me an even deeper respect for the band, and reinforced all the reasons I loved them in the first place.

I noticed a quick pronoun change, there, when you talked about the live show. Your "I" for just a moment there became a "we." Any thoughts on the personal vs. communal—those, maybe "vs." is way too loaded a way to split those two experiences up—natures of your Rush fandom?

I did do that, didn’t I.  That’s an easy trap—assuming the way you feel about something is universal, or at least applies to the majority of other people who like that thing.  I only personally know a handful of Rush fans (maybe 6 or 7?  Something like that), so I shouldn’t presume to speak for all of Rush Nation.  But to answer your question, I think that, from reading the thoughts of other Rush fans I’ve not met, there seems to be a shared sense of…proprietorship, maybe, when it comes to the band.  Like we *get* Rush and the rest of the world doesn’t.  They’ve never been critical darlings and to wear your fanhood on your sleeve is to invite derision.  At least, that’s the way it was for a long time.  So when I used “we”, I was thinking of what I assumed to be the collective feeling of loss that many—most?  All?—Rush fans felt when Neil “retired” from the band, and by extension, the collective rapture they—we—felt when Neil found love and purpose again, and re-joined Geddy and Alex.

That being said, being a Rush fan has been, and is (almost by definition), a very personal thing for me.  I can tell Kristen, for example, that Rush means more to me than music, but I don’t really have the words to get at the heart of *why* it means so much.  That feeling is tied up in so many things, the way my life has unspooled, years upon years of loneliness and isolation and not fitting in.  It’s ironic, of course, that those feelings, the very reasons I connected so strongly to Rush in the first place, are presumably shared by the vast majority of the people who listen to their music – in other words, I’m not alone in being alone.  But in the end, the things that led each Rush fan to his or her own revelation and moment of discovery are still unique and are borne of a sense that somehow, the band articulates those things *we* could not, or would not, articulate on our own.  And I think that’s why so many Rush fans are so intensely—even fanatically—loyal to and protective of the band’s music and legacy.

You're going to see Rush next week. Anything in particular you're looking forward to?

A couple of things: first, hearing the new album live, of course.  It’s easily Rush’s best record in 20 years, and is probably comparable to anything the band has ever recorded.  I’ve read that they’re featuring the album heavily in the second half of the early shows on this tour, so I’m very excited about that.  Something else I’m looking forward to is introducing my girlfriend, Kristen, to Rush for the first time.  I’d love to go back and see Rush again for the very first time; failing that, I’m thrilled for—and slightly envious of—her, being able to experience the show with fresh ears.

Also, I love Neil’s drum solos.  I’m sure he’s cooked up a great new one for this tour.

How was the show, Zane? How are you feeling about the Rock and Roll Hall of Fame nomination?

I don’t really know what to say about that Rush concert. I felt simultaneously closer to and more in awe of the band than ever.  There was an air of both grandeur and intimacy to it.  They honored their history but showed they were far from a greatest-hits band.  They played the new material with as much authority and command as any of their classics.  Just like I tell people that every album Rush makes is better than the last one, every show of theirs I’ve been to has been better than the previous one.  “Ceiling Unlimited,” no doubt.

I can proselytize about Rush and their music all day long, but when it comes to describing the *experience* of being in their presence, it’s beyond my ability to communicate that.  As far as the HOF nomination, I actually started writing you something about that yesterday, but shelved it.  I’ll give you the abridged version:

These guys really are approaching “nothing left to prove” status.  Strange times for a group that has been described as “the world’s biggest cult band.”  They’ve sold a zillion records.  They’ve amassed and retained an immense, international fan base.  They’ve influenced a generation of rock acts.  They’ve earned commercial and critical respect.  They’ve reinvented themselves a dozen times over, and 38 years into their career, made an album that’s widely acknowledged as one of their finest.  And now, this—the Hall of Fame.  They’ve really done it all.  And they’re happy for *us*, the fans, instead of gloating or saying, “it’s about time”, which they would have every right to do.  True artists, true originals.

Their reaction in the wake of the nomination – to express their happiness for their fanbase, not for themselves – again tells me that my faith in them was not misplaced.  I’m prouder than ever to call Rush my favorite band.

Matthew Simmons is the Hobart interviews editor. His upcoming book of short stories, Happy Rock, will be available from Dark Coast Press in May of 2013.