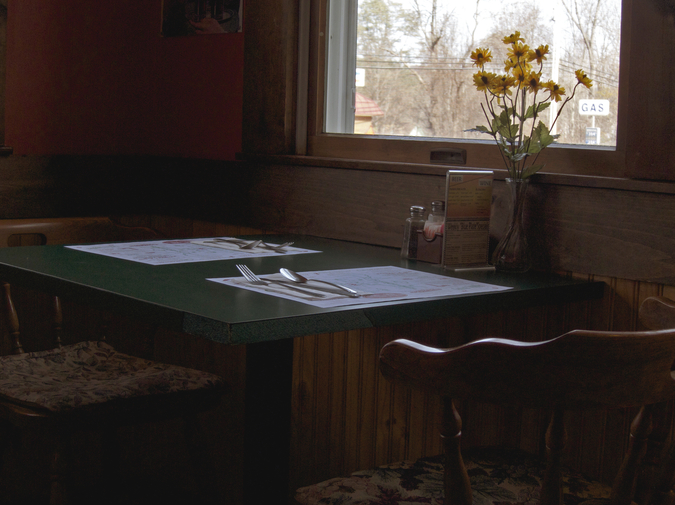 The weekend in Portland, Oregon, had been our first vacation without kids in almost five years, and I'd had this vision that my wife and I would feel unshackled and adventuresome again. Instead, we drank too much the first night, woke with hangovers, and missed the walking tour of the Shanghai Tunnels, which had been at the top of Sherri-Anne's list. We ate a lot of doughnuts that afternoon. We watched two pay-per-view movies in the hotel, and not the fun kind. On Sunday, I was ready to concede defeat and get back to the kids, but we found that our flight had been delayed and we had an extra two hours to kill in the airport. We bought coffees and filled our water bottles at a drinking fountain. Then Sherri-Anne saw a small Pendleton store on the concourse and walked in without asking what I thought. That was okay. A cool, misting rain had been falling on Portland that weekend, and I'd actually envied the smug hipsters in their tight wool shirts.

The Pendleton shop's lone sales rep, a middle-aged woman with frizzy hair that matched her wool sweater, stood between the men's and women's sections, pretending to be busy straightening hangers. If one of us tried something on, she'd be right there to tell us how good it looked on us. I knew I couldn't buy the shirts I'd envied because wool makes me itch, but I kept trying them on anyway, soaking up the saleswoman's compliments and not looking too closely in the mirrors. Then I noticed the hat rack.

There is nothing good about being prematurely bald. My head gets cold and wet in the winter, and sunburned in the summer. Plus, it makes me look older and more staid than I actually am. Most days I wear a baseball cap or a beanie, but I also own some nice flat caps, a newsboy cap, a fisherman's bucket hat, and a wide-brimmed nylon sun hat I used to wear while hiking in the summer. The Pendleton hats were nothing like these. They were all made of wool, of course, and looked as if they'd been made by real artisans or craftsmen, whatever you call the opposite of sweat shop labor. The one I liked best was made of thick brown wool and had a brim like a cowboy's hat, but not as wide or goofy. It looked like something that Indiana Jones would wear, or maybe Humphrey Bogart. The crown had two divots where I could hold it with one hand like a movie star.

"Isn't that a great hat?" the saleswoman said. "Some people can't pull it off, but it looks perfect on you. How does it feel?"

I lifted the hat off and on, using one hand on the crown and squinting as if peering through a smoke-filled room. "It feels sturdy," I said, which was true, but I wasn't thinking about the physical hat so much as what it was doing to my perception. The wide brim created an artificial frame across the top and upper sides of my vision. It was a pleasant effect which cut the glare and reduced the number of visual things competing for my attention. And the hat made me feel as if it were decades earlier, as if the stewardesses that afternoon might serve me Rob Roys and Tom Collinses and encourage me to smoke on the plane. As if all the men in the concourse would be wearing fitted suits, carrying newspapers and unfiltered Chesterfields. It made me nostalgic for a time I had never experienced.

"Did you know that it's weatherproof?" the saleswoman said. "And it will never lose its shape. Go ahead and twist it up. Or wad it into a ball, like it was stuffed into your luggage. It will pop back out."

I didn't crumple the hat. It was well-built, with competent stitching and a thin leather band wrapped around where the brim meets the crown. It wasn't something I wanted to crumple.

"Go ahead," she said. She took the hat, mashed it between two hands, and let it spring back into shape. She handed it to me upside down so I could see the inside. The imprinted label said:

The words "pure crushed virgin" gave me a thrill. I thought of a scene from an old movie, a virgin tied and thrashing against a long wooden plank, a tribe ready to throw her into the mouth of a volcano.

"This one won't. Go ahead and wear it around for a while. The wool is so fine that even sensitive skin won't be bothered."

I put it on and looked in the mirror. Rugged. Independent. Adventuresome.

"Sexy," she said. I couldn't tell if she was teasing.

"Maybe I'll wear it a little, see if my head itches."

I continued looking at the forbidden shirts and some wool pants that were fully lined but too warm for where we lived in California. Wearing the hat, I made my way to the front of the store and stood in the doorway, watching the travelers walk past. I'd never considered wearing a full-brim hat in a city. I wanted to see how many men were wearing them, what those men looked like, and whether I wanted to be counted among their ranks. Plus, I liked smiling at women in airports, where no one has anything to lose.

As I watched, a shift occurred on the concourse. It was like those moments in a forest when the wind dies, the leaves go still, and I'm shocked not so much by the sudden calm but by the realization of how busy and noisy the trees had been up to that moment. When this happened on the concourse--when the travelers quieted and dispersed--a single woman emerged. She was a young flight attendant wearing a navy blue skirt and white blazer. Her hair was pulled into a wet ponytail, and her lipstick was brighter than I imagined could look good on a person. On her it was stunning and clean. A small piece of wheeled luggage followed her obediently. As she approached, I smiled and tipped the brim of the hat like an old movie star.

She winked and we smiled at each other as she walked past. Lucky me! I collect smiles from strangers like this and file them away. It's not only to feel as if I'm still attractive to someone besides Sherri-Anne, although that is certainly part of it. There is also the joy of making a human connection, however transient. And I like the reminder that there are still possibilities in this life--that I've made some choices and still have some choices to make.

I bought the hat and wore it home, thinking it might earn me a few more smiles. But it looks ridiculous in this city. One day I wore it on my walk to the post office. The postal worker, a foreign man I'd never met before, looked at me and said, "Ha ha! You a cowboy? Cowboy!" In the summer the hat is too warm and in the winter I'm more comfortable in a beanie, which cuts low over my ears and keeps the back of my head warm. Instead, I wear the Pendleton hat around the house. It has become my reading hat. With my head bent over a book, the brim cuts the glare and blocks the distractions in the room. I don't see the TV, the dishes, the laundry. The dog likes to sleep on my hat, and our kids sometimes throw it like a Frisbee, but it has retained its shape and does not make my head itch, just as the saleswoman promised. In this way it has been a good and practical hat. It's also a useful reminder, to me, of a young flight attendant, who this very minute might be standing in an airplane miles above, touching a man's shoulder to wake him and advise him of the descent.

Sam Wilson's stories have appeared in The Sun, Willow Springs, Juked, and The Vestal Review. A graduate of the MFA program at Queens University, he lives in Olympia, Washington.