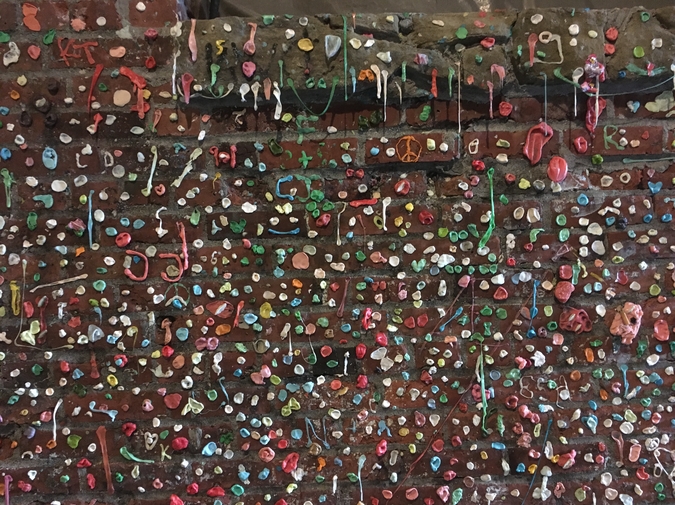 The Beaches Are Made of Fish Bone Here

and Candlewood Lake used to be a town, dragged away by Barnum and Bailey circus elephants, flooded by the world’s largest water pipe then, three men wide across the mouth. It was a black reservoir with the peaks of church steeples and the rusted wrought iron fences of graveyards just below its surface. We had a boat, and I didn’t like my peach-fuzzed stomach to touch the water which always seemed to hide, would only dip my feet in so long as I could see them, would withdraw as soon as my toes began to disappear. Candlewood Lake, home to the ghosts of people who had been safely evacuated, had left their last meals on the table for stock fish to find a few days later, their sunny bellies tossed by the handful into the dark where they quickly learned to raise red dorsal spines whenever they were drawn back towards the surface, home to Chicken Rock, a rite of passage for Connecticut tweens who were no longer kids but were often mocked for being small. There used to be a rope swing, but someone had risked the journey up the steep slope out onto the dead tree to take it down one summer when a boy had not let go and swung back to dash his head against the rocks, the water so dark it didn’t even bleed.

I climbed up there once, I think. I can’t recall how I got there from the boat, or the moss-covered rocks. My foot may have slipped once or twice, if at all. Waiting in line behind skinny, bare-chested boys pretending to be men, I picked up a salamander from algaed rocks where I could have sworn I saw a distinctive rust-colored gash. It opened its toothless mouth at me, a vacant threat, and when I looked inside I saw that it had an eye in the roof of its mouth. Overcome with sudden nausea I let it slide out of my hand, over the cliff and down. I can’t remember the mossy edge, water-slick from shriveled feet, or leaning over slightly, toes gripping, to look at the water below, wondering whether I might crash through the roof of an old greenhouse, or accidentally land in a yard now so overgrown with grass it had evolved into seaweed many feet tall and well slimed, and I pictured it grabbing my feet. I got down from there somehow, if I ever went up at all, and the next summer we sold the boat. My dad had used to like calling out the depth of the water around various parts of the lake, but I never wanted to know.

I once thought my body might look good on a floor, maybe under soft lighting with my hair splayed out around me, a picturesque hide. Or as a coffee table or as a rug, any way I could be more furniture, more home goods—this was a body—a thing you look at off-handedly most of the time, except when you remember you have it, seriously consider it for a moment before looking away again, because now you’ve been distracted by a pot of pasta boiling over. I used to worry about my pores or fear I was just a loose seam, not knowing exactly what laid beneath cat-gut stitching. But now it’s about function; I no longer wish to be draped, instead keep inside of me your Sunday clothes—velvets, chiffons, brocades, Italian leathers—and wear clawed feet instead of being trampled by them. I am a statement piece, I was made for hide-and-seek children, for commanding more than the sound of sizzling water.

Lisa Favicchia is the Managing Editor of The Coil by Alternating Current Press and holds an MFA in Creative Writing from Bowling Green State University. Her work has appeared in or is forthcoming from Midwestern Gothic, Switchback, Inscape Journal, Glass: A Journal of Poetry, and Driftwood Press, among others.