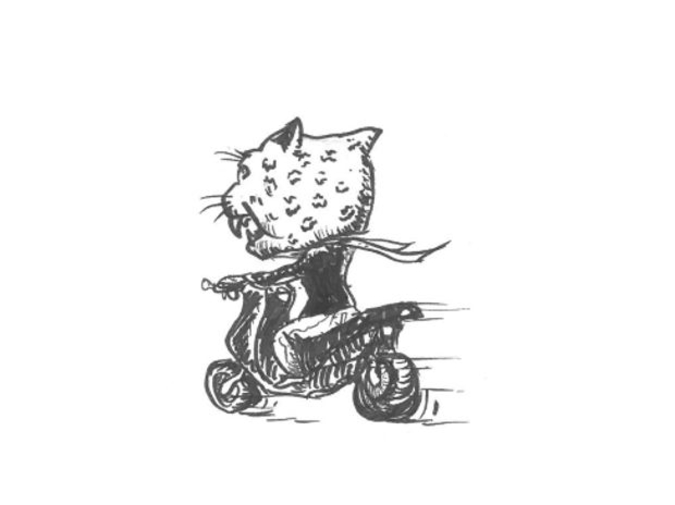 Cortez was on the run from some scary dudes. He'd fudged receipts and padded his expenses a bit when he was doing contracting work with a shady landlord, and now some hard-looking guys with buzzcuts were looking to break his legs. "You'll find a way out," his abuelita told him when he stopped by her place to borrow a little money and lie low. "Just watch for the signs."

He didn't want to stick around her place too long for fear of bringing the bad guys to her doorstep, so he set out by himself on the streets of the city. He had a blanket rolled up and strapped over his shoulder with a rope, and the twenty dollars she'd given him. He knew it could still get worse, but he couldn't remember being this low before. Traffic whizzed along the avenue, headed downtown. He trudged along the sidewalk under the cedar elms. At least it wasn't raining.

That was when he saw the giant jaguar riding a motor scooter. It buzzed right past him, a bobble-headed creature with a human body. It slowed and pulled into the parking lot of a residential complex. Cortez stopped and watched as the figure parked the scooter, then dismounted and removed the giant jaguar head. Long, silvery hair tumbled into view.

The woman set the jaguar head on the ground, then stretched as if she'd been riding for a long time. She was tall, dressed in leather motorcycle duds. In the spill of light from a nearby porch he could see that the jaguar head was made of papier-mâché, painted brightly with spots and flashing eyes and glinting teeth in its roaring mouth. Wiry bristles accented its eyebrows and whiskers.

The woman dug a backpack out of the scooter's seat compartment. Her lightning bolt earrings glittered in the dark. Cortez took a few steps towards her, wondering if this was the sign.

The woman didn't notice him as he approached. She was concentrated on looping her arm through the jaguar's open mouth and carrying the giant head along with her stuffed backpack. Hands full, she gave a sigh and went down the shadowy walkway towards the courtyard.

He at least should have offered to help carry her things. What kind of gentleman was he? That was when he noticed the key dangling in the scooter's ignition.

The moment he saw it, someone yelled "Cortez!" He looked over his shoulder and saw two buzzcut dudes in a pickup truck cruising slowly along the avenue.

He wasn't a thief, but the world kept narrowing down his choices. He climbed on the scooter, started it up, and rolled forward. The pickup turned into the parking lot as he opened up the throttle, heading for the side street where an alleyway or bike path might give him the escape route he needed.

You could say some bad things about Cortez, but he had this going for him: once he got started on something, he didn't quit. He kept riding, and didn't stop. He stuck to side roads until he was out of the city, then took state highways south. The winding roads got straighter as the desert approached. By morning he was at the border. At a gas station on the Mexico side he filled up the scooter's tank, then left a note that said sorry before taking off as the proprietor hollered after him. He made sure to remember the place so he could swing by on his way back and settle up.

Before noon, he found a spot of grassy shade in the plaza of a small town. He slept with his head on the blanket roll. "What kind of man are you?" Jaguarhead asked him.

"I don't know yet. I'm still trying to figure that out."

"How can you live if you don't know what you are?"

"Well, look at you. Are you a papier-mâché mask? Or are you a jaguar?"

Six days, heading south. His ass felt like a petrified stump and his hands were numb from the vibrations of the road, but these were small annoyances. The fact that he'd escaped, that he was free, that his legs weren't broken--these were all prizes. The farther south he got, the more easily the smile played on his face. He accumulated a little money here and there, boosted a few tortas and cervezas from roadside tiendas, and he began to look for places he might settle down and stay a while.

On the outskirts of a small city, he spotted something strange on a billboard: a giant jaguar head. He went by, circled back, then stopped under the billboard.

Flashing eyes, glinting teeth, bright spots. The jaguar head roared out from the billboard, staring at all the desert behind him. It was an advertisement for the Museo de Máscaras in Rio Muerto. There were other masks on the billboard--a wolverine, a coyote, a devil--but only the jaguar drew his eye.

He rolled into Rio Muerto at twilight. People walked the dusty streets as he cruised along looking for the museum. He found it in what looked to be an old stone church. The museum was just closing up, the last visitors coming out as the security guard held the door open for them. In the small plaza, several people were selling things on blankets, and Cortez joined the museum visitors as they walked around looking at the offerings. Silver jewelry, hand-painted alebrijes, tasseled rebozos--but especially this: masks.

One seller, a young Huichol boy, had a blanket covered with small wooden masks, painted and rendered in intricate detail. Behind him, on a plank across two saw horses, were three giant heads: a rooster, a devil, and a jaguar.

Cortez felt his breath quickening. It was identical to the jaguar head at the start of his journey, down to the bristles of eyebrows and whiskers. He stepped around the boy to put his hands on it but someone else stepped up at that moment.

"This is amazing!" she said. It was a tall woman in a black motorcycle jacket with a long tumble of silvery hair. She lifted up the giant jaguar head and looked at Cortez through the toothy opening of the mouth. Her lightning bolt earrings glittered. "Oh, sorry," she said. "Were you going to buy this?"

"No, no," Cortez heard himself say. "This is definitely for you. Are you a collector?"

"No," she said, turning the giant head in her hands to admire the details. "I've never seen anything like this before in my life."

Cortez hummed as he considered that.

She looked into the jaguar's eyes. "I just don't know how I'd get it home. It'd be crazy to drive it all the way back on my scooter."

"You're traveling on a scooter?"

"Yeah." She waved at the scooter he'd parked at the edge of the plaza. Cortez's scooter, the woman's scooter.

"You should do it," he said, suddenly emphatic. "Look, you can wear it over your head, like a giant helmet. I think it was meant to be."

She chimed laughter. "Maybe. But I think I'll wait for a sign."

She wandered off to look at the other goods on blankets arranged around the plaza but Cortez kept his eyes on her.  A little while later, she rolled off on the scooter.

A hungry moon rose. When the boy selling the masks was distracted with another sale, Cortez slipped in and snagged the jaguar head, then sprang for a nearby alley to hide in the shadows until the boy stopped hollering after him. The mask's beady eyes regarded Cortez in the moonlight.

Later, he prowled the town and found the scooter parked outside a hotel. He carefully placed the giant head on the scooter's seat, then hid behind a fountain to watch as she came outside to discover her prize. She held up the jaguar head, looked around, perplexed but delighted. Radiant, in fact. She climbed onto the scooter, started it up, and lowered the giant jaguar head onto her shoulders.

She rolled away over cobblestones, a mythic bobble-head in the Mexican night, headed out of town.

Cortez found a comfortable spot on a bench on the alameda and laid his head on his blanket roll. Jaguarhead watched him. Its whiskers seemed to quiver as if it were flying across the desert at speed. "Are you a thief," Jaguarhead said, "or a good man?"

Cortez smiled. "We both know the answer to that question, my friend."

A.C. Koch is a teacher, writer and musician whose work has been published in literary journals such as F(r)iction, Puerto del Sol, Sequestrum and forthcoming in Analog. Nominated twice for a Pushcart Prize, his short stories have won awards at Philadelphia Stories, Carve Magazine and the Tennessee Williams Short Fiction Award. After spending about fifteen years living and working overseas (France, South Korea, Mexico) he has returned to Denver, Colorado, where he works with language learners and makes music with Firstimers, a power-pop ensemble.